The last time Standard Candy had any real spend for marketing Goo Goo Clusters was sometime early in the last decade.  Needless to say, when you stop getting in front of people you tend to slip from the public consciousness and we certainly felt that these last few years.  That is why in 2010 when I set about trying to revitalize this historic brand I advocated marketing programs that went beyond simply giving away candy (albeit, an important part of the process now that we’ve got a superior product for people to taste).

One thing I had not anticipated when I took over day-to-day responsibility for the Goo Goo brand was the number of solicitations I would field.  There seems to be an endless number of concert series, county fairs, food expos, sports teams, civic events, etc that are all looking for sponsors and in Tennessee, a brand with the rich history of Goo Goo Cluster seems often enough on the minds of folks looking for financial help with their respective interest.  Add in a little press about a concerted revitalization effort in say, The Tennessean and my phone started blowing up.

Many events seem reasonable enough to sponsor – especially when all a group wants is product to distribute into event swag bags.  However, we’re running a business and anytime I agree to give away candy I’m taking revenue out of not only our pocket but the retailers who are our partners.  This past week I was approached by a civic group in Nashville that wanted me to donate a “few thousand” bars for an event that will be mostly held downtown.  We had been involved in the past but I felt it was unfair to our retailers on lower Broadway that make their living selling to tourists to simply give away candy to out-of-towners that would likely be glad to pay for it.  I told the woman in charge that I would rather buy an ad in her program than give away Goo Goo Clusters because even though the cost to advertise may cost more than giving away candy, the benefit to my retailers would be significant (i.e., no lost sales and advertising for those same retailers).  She said she would call me in January about next year and I’ve no doubt she will.

So where should one spend their marketing dollars?  After attending my first blogger retreat this weekend I can say that one would be hard pressed to find a better ROI than sponsoring one of these events.  The inaugural,  Eat, Write, Retreat was the brainchild of Casey Benedict and Robyn Webb and was held at The Madison Hotel in Washington D.C. the last three days.  Attendees – some with as many as 10,000 followers were almost all food bloggers or food photographers of some fashion or other hailing from places like Boston, Philadelphia, New York, Canada, the Carolinas – even Houston, TX.  These people share a love of food that is so intense that they all right about it in some form or another, photograph it and publish it online.  Quite simply, these are the tastemakers (pun intended!) that sit out on the frontline of the food world, reporting back what is great, good, average or poor.  I couldn’t think of a better platform for us to showcase our revamped products.  As a sponsor of the event we participated in a tasting on Friday night wherein we fielded questions from the attendees and were able to tell them about the ingredient upgrades that we’ve made to the products this past year as well as the sustainability measures we’ve implemented.  It was an engaging process and one that validated my decision to sponsor the event.

We also sponsored an attendee, Beth Sachan, who is a Nashville-based food blogger who went to EWR11 as an “ambassador” to Goo Goo Cluster.  Beth did a great job of bridging the gap between the corporate and blogger world’s and really helped make the attendees feel comfortable with what Goo Goo was about and what we were doing at the event.  I’m grateful for participation on our behalf and I’m sure we’ll find ways to keep working with her in the future.

That’s it for now.  Off to Chicago in the morning for the Sweet & Snack Expo 2011 – an all together different kind of event that I’ll post about next week. 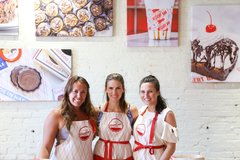 The Goo Goo Shop & Dessert Bar invites you to experience the br...

It's an official Southern Lovefest!