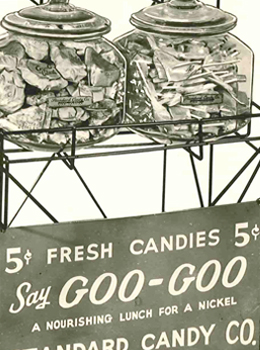 In 1912, in a copper kettle at the Standard Candy Company at Clark & First Avenue in Nashville, TN, America's first combination candy bar was invented. A roundish mound of caramel, marshmallow nougat, fresh roasted peanuts and real milk chocolate; its renegade shape was more difficult to wrap than the conventional rectangular or square shapes of the day. More importantly, this was the first time multiple elements were being mass-produced in a retail confection. Previous to the advent of the Goo Goo Cluster, candy bar manufacturing consisted of bars solely using chocolate, caramel or taffy. The Goo Goo Cluster represented the first time a bar consisted of more than just one principal ingredient. 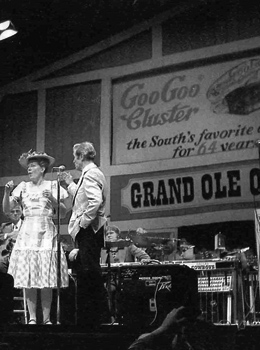 The recipe was a joint undertaking by Mr. Howell Campbell, Sr. and Mr. Porter Moore, the original plant supervisor back in 1912. Mr. Campbell is said to have blended chocolate the same way fine whiskey is blended. He acted as official taster and was very particular about the quality of all the ingredients. All of the ingredients that go into a Goo Goo Cluster are foods your taste buds remember. Luscious caramel, smooth creamy marshmallow nougat and fresh roasted peanuts all covered with a thick coating of real milk chocolate. The Goo Goo Cluster recipe hasn’t changed over the years, although the cooking method has undergone a few tweaks. Goo Goos used to be hand dipped and sold without wrappers under glass at drug store candy counters. With the dawn of hand wrapping, ladies would swaddle the Goo Goo Clusters in tinfoil. Eventually, machinery was put in place to automate wrapping the Goo Goo Cluster. Today, the process of making Goo Goos is so streamlined that Standard Candy in Nashville can produce 20,000 Goo Goo Clusters an hour!

About That Great Name

For a time it was impossible to ask for a Goo Goo by name since no one could decide what to call the delicious thick clusters of candy. The story of how the candy came to be named comes in many versions. Some people say that it was named Goo Goo because it’s the first thing a baby says. Howell Campbell, Jr., the man whose father invented the Goo Goo Cluster, says that his father used to ride the streetcar to work every day and he would talk the matter over with fellow passengers. Mr. Campbell was announcing to fellow passengers on the streetcar his newborn son’s first words and a school teacher made the connection with the candy. She suggested Mr. Campbell name his treat Goo Goo! It is so good, people will ask for it from birth.

One of the most interesting facts about the Goo Goo Cluster is its association with Nashville. People visit Nashville, try a Goo Goo Cluster and are hooked on the Southern treat. Fortunately, now wherever you live in the U.S. or Canada, Goo Goo Cluster fans can order the famous candy online year round.

The Goo Goo Shop & Dessert Bar invites you to experience the br...